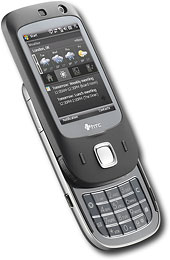 Best Buy has listed and begun taking pre orders for the US version of the HTC Touch Dual Windows Mobile smart device on its respective websites.

As we reported previously during CTIA this past April, Best Buy and HTC entered into an exclusive agreement to offer the device through its Best Buy Mobile concept stores, along with both BestBuy.com and BestBuyMobile.com online storefronts.

The HTC Touch Dual will feature a quadband GSM/EDGE radio with US W-CDMA access on the 850 and 1900 Mhz bands with HSDPA high speed data access, a 2.4 inch QVGA capacitive touchscreen display, Windows Mobile 6.1 with the TouchFLO user interface, standard 12-key dialing pad with additional keys for device functions, Bluetooth 2.0 with stereo audio support, 2.0 megapixel camera with video recorder, microSDHC expansion slot, and an additional front-mounted VGA camera for video calling (it is not known if AT&T will offer Video Share support for the device, despite supporting video calling), and speakerphone.

The device does not currently have a release date, but the retail price is set at $549.99.